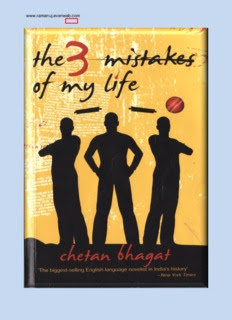 About Three Mistakes of My Life by Chetan Bhagat PDF

Chetan's third book, the just-launched Three Mistakes Of My Life starts off in the same effective manner as his earlier two books, but unlike the other two, this one starts to appear too far-fetched towards the middle and then just irrevocably falls apart in the end.

The story recounts the life of three youths, Omi, Ishaan and Govind trying to make a life staying in small-town Gujarat. Given Govind's business acumen and Ishaan's love for cricket, the youngsters decide to open a shop that sells cricket goods. Omi's family helps them to get a rented place outside a temple, and soon enough the place is a hit with the locals. Chetan's biggest strength as a writer is his ability to create interesting settings and situations.

Moving on, Ishan takes a great liking to one of the local Muslim boys, Ali with a magical ability to smash the ball for a six each time. Living with the regret of making it himself, Ishan decides to train the 12-year old. Strangely, the lad himself is least interested in cricket but Ishan and his friends take it upon themselves to not only train him for free, but even endure great pains to take him all the way to Sydney at the suggestion of one of the Australian players. There, Ali is offered a contract on the condition that he become an Australian national only to have the 12-year-old spout dramatic lines such as, 'Does that mean I cannot play for India?! Then I don't want it!' and walk away.

This is where the novel begins to disintegrate and goes on to become embarrasingly over-the-top and melodramatic. As long as the author only incorporates the Gujarat earthquake and how it brings down the hopes of one of the novel's lead character, Govind -- Chetan's attempt at infusing a natural disaster with the personal is acceptable. But it's hardly likely that both the Godhra episode and the following riots would again have a direct bearing on these very characters.

The last few chapters especially go out of hand. One knows Chetan's a big fan of Bollywood and believes that much like a Hindi film that must have action in the end, a novel too must have its share of blood and gore to make it wholesome enough. First of all, Bollywood itself is moving away from formulaic fares so Chetan's jumped in a bit late here. Secondly, there is no emotional resonance or reasoning to any of the violence that takes place in the temple, with the Hindus trying to attack Ali with Ishan and others trying to save him.

It's never clear why these youths are fussing over Ali so much. There's only one explanation given - that he's gifted. Why would anyone in their right mind take him all the way to Australia or give up their life (yes, one of the youngsters dies trying to protect the boy!) to preserve his talent. None of their sympathies for him are based on the fact that he's a Muslim, nor do they save him out of any moral obligation apart from the fact that he is a potential cricketing great! Chetan's intentions are honourable but his notions of nationalism and patriotism are just too naive and simplistic.

In between, there's a love story thrown in between Govind and Ishan's sister, only to have Omi spout cheesy lines like, 'You can't hit on your friend's sister, that's an unwritten rule' etc.

Honesty, I wanted to like this book. It begins well, it’s setting is nice and it truly attempts to give the reader a slice of small-town India. Too bad, the book goes nowhere with it.